The World Gym Club for bodybuilding and fitness organized a ceremony to honor its champions of accomplishments, in addition to honoring a large number of bodybuilding icons and supporters of the game's march at the state level.
The honoring ceremony, which took place with the support and sponsorship of the International Academy of Bodybuilding, was headed by Colonel Abdul Karim Saeed, President of the Academy and Chairman of the Board of Directors of World Gym Club, and was accompanied by Zayed Al Jallaf, Vice President and General Director of the Academy, Walid Abdul Karim, the international lecturer at the Academy, Wissam Abdul Karim, the club's general manager, and a large crowd of game icons.
The honoring included the former UAE champion, owner of the UAE's first gold in bodybuilding, Murshid Mubarak, and World Gym champions: Nader Flip, owner of the Physique gold, Abdulaziz Al Ali, the owner of the gold medal in physical strength, Muhammad Abdul Karim, the owner of the jujitsu gold, Fatima Saleh, the gold medalist of physical strength in the open weight, Fawzia Al Hammadi, winner of the gold master in physical strength.
The club coaches Khalifa al-sheik and Abdulaziz Al-Awadi, lecturers at the IFBB Academy Salah Taher, Salem Al-Amri and Hamza Al-Mail, and the official of the Academy branch in Abu Dhabi Rashid Al-Zaabi, and a number of guests of honor, Munira Al-Balushi, Maryam Al-Mansoori, Taqwa Ali, and Ahmed Salem, were honored as well. Media men and a large number of representatives of collaborating parties.
In conclusion, Colonel Abdul Karim Saeed was keen to extend his sincere thanks to everyone who attended the honoring ceremony, considering honoring the icons, achievers, and collaborators a duty that comes within the framework of their support, encouragement, and support for sports in general, hoping that the achievements will continue in order to raise the name of the UAE high, and he promised more support To all the champions, whether from the children of the World Gym Club or any other club, he thanked the organizers of the ceremony, wishing everyone success. 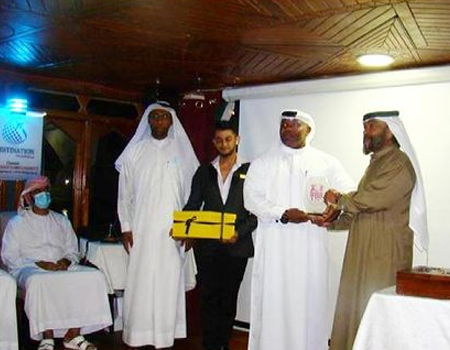